Inflammation & the Other Oil Industry: Part 2 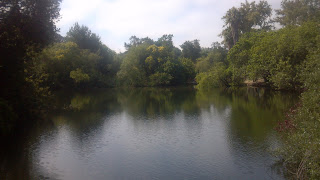 First off, the picture posted with this entry has nothing to do with inflammation or diet.  I took it yesterday while on a six or seven mile walk, mostly through El Dorado Park and its Nature Center, which are just a few minute’s walk from my house.
In an earlier post (June 6, 2011) I discussed the potential of trans fats and partially hydrogenated oils to promote a pro-inflammatory state, among other unhealthy effects.
There are other  pro-inflammatory fats and oils that have intruded into the food supply , which I will discuss at a later date, but first I want to address some of the reasons these oils have come to dominate the standard diet in the US.

In about 1979 or perhaps 1980, I recall discussing the intake of saturated fats with my brother in law.  Saturated fats are mostly found in animal flesh (meat, poultry, fish, and eggs) and dairy products (milk, cream, butter).  A few years earlier, while pursing my Bachelors degree at San Diego State University, I took a nutrition class where I learned of a study from the early 1900s where rabbits have been fed whole milk or cream and then evaluated for the development of atherosclerosis or plaque development of arteries, which is associated with heart and cardiovascular disease.  I recall that rabbits were chosen for the study because the blood vessels in there in ears could be easily examined.  The lesson from my nutrition professor was that we should eat much less saturated fat to protect ourselves from heart disease.  My brother in law, a chiropractic doctor with a strong nutritional orientation in his practice, laughed and quickly pointed out that rabbits don’t naturally drink milk or eat cream.  They just eat plants.  Feeding them something they are not designed to eat would be expected to make them sick.  The same goes for humans.
He then got a book out to show me. It was written by a dentist named Weston Price, DDS.  Dr. Price had apparently studied people in various parts of the world that were somewhat isolated.  Many of the photos in the book were of people’s teeth and faces.  They certainly looked healthy and Dr. Price concluded that what he called traditional diets, many of which included relatively high levels of saturated fats, were associated with better health when compared to modern diets of mass produced foods.  Although I found this to be interesting, I didn’t give it much thought as I knew of no dentists who were interested in nutrition (other than recommending cutting back on sugar).  Years later, some of Dr. Price’s conclusions started to make sense but his suggestion that traditional diets with ample saturated fats could be healthy was not in keeping with the growing vilification of saturated fats in the medical community.
In the 1950s, the evidence that saturated fats played a major role in cardiovascular and heart disease picked up steam.  What is now often referred to as the Seven Countries Study, authored by Ancel Keyes, M.D., concluded that the amount of saturated fats eaten in sevenl countries, including England, Canada, Australia and the US, were a major contributor to heart disease.  (Never mind that data from about 15 other countries was reportedly available but was ignored.  The omitted data found little to no correlation between saturated fats and heart disease).
Truly, eggs, meat and dairy products are typically higher in total fat content than vegetables, fruits, grains and beans.  It is also true that some types of saturated fats raise cholesterol levels (another topic of some controversy, best discussed separately).  But the relationship of saturated fat intake and heart disease is weaker than has been portrayed and taught for the past 60 years.


The result of this fear of saturated fats led to the replacement of products such as butter and lard in cooking.  They were replaced with the previously discussed trans- fats and partially hydrogenated fats as well as vegetable oils (which typically come from grains, seeds and beans, as opposed to vegetables.   These include corn oil, safflower oil, soy oil and peanut oil).
Because these seed oils were free of cholesterol (which only occurs in animal foods) and had low levels of saturated fats, they were considered to be heart-healthy.  Regrettably, this paved the way for seed oils to tip the scales towards an unhealthy balance between what are called Omega 3 fats and Omega 6 fats.
In addition, a growing a number of comparisons of the fats found in livestock that eat their natural diet (usually grass) compared to factory farmed, mass produced animals finds abnormal reduced levels of Omega 3 fats compared to relatively elevated levels of Omega 6 fats.
We need both types of fats for proper functioning immune and inflammatory systems.  But, just like the rabbit -study 100 years ago, eating something you are not designed to eat might be expected to make you sick.


Next time, I will discuss the relationship between Omega 3 and Omega 6 fats and their role in inflammation.
Posted by Robb Russell, D.C. at 10:28 PM

Email ThisBlogThis!Share to TwitterShare to FacebookShare to Pinterest
Labels: This is Long Beach?