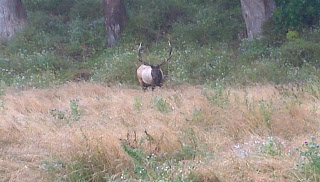 My wife and I have been bouncing around California quite a bit in the month of August.  From Yosemite (as mentioned in my August 10, 2011 post), to Baja California (twice), central California (including the magnificent Rancho Santa Margarita, a working ranch since 1774) and most recently Point Reyes National Seashore in northern California.  We put in a lot of driving time but also got to take some great walks to see some beautiful sights.
In spite of not seeing patients for a good part of the month, I cannot turn my attention away from health, abundant and nutritious food, exercise and stress management.
One of the unexpected pleasures was seeing wild elk in Point Reyes. These animals were beautiful and got me to thinking about what passes for meat in the Standard American Diet.  Not to worry, the elk we saw on the trial were in no danger of being hunted or harvested as they live in a protected preserve but they did get me thinking…

Dietary fat, whether saturated, mono-unsaturated or poly-unsaturated (discussed in prior posts) is essential to normal health.  Problems arise when the proportion of fats or absolute amount of fat eaten is out of balance with human genetic design.  Certainly the traditional diet of the Inuit of the Arctic (copius amounts of animal fat) and Kitavans of the South Pacific (perhaps 50% of dietary calories from coconut) are high in fat. Research on contemporary hunter-gatherers suggest that we probably operate best with saturated fats making up about 10 to 15% of our diet.  Feed lot cattle, industrially raised pigs, poultry and the like are easily 30% or more saturated fat.  (Plus, as I mentioned previously, the fat profile of grain fed, feed lot animals is out of balance with regard to mono- and poly- unsaturated fats as well as having other unhealthy characterisitics).
Which brings me back to the elk.  The fat content of wild animals, the kinds hunted for thousands of years in the Point Reyes area for instance, varies from season to season but tends to fluctuate within the 10 to 15% range.  Historically, people didn’t just eat muscle tissue, but ate almost all of the animal so some parts had more fat, others less, but overall the fat content and make up was far different than what you are likely to find in the supermarket (what I refer to as Obese Meats).
We have been far too successful a species in populating the planet for there to be enough wild game, wild fish or poultry to sustain us.  Thanks largely to massive production of grains, our food supply has become stable and allowed our population to keep growing.  Food, like the front wheel of a bicycle, is followed by population, the rear wheel.  The rear wheel cannot overtake the front wheel.
How can we eat sustainable meats that mimic the quality and make up of wild game, like elk? Grass fed, naturally pastured animals can be raised in an environmentally complimentary and humane manner.  This type of meat has fat and nutritional characteristics quite similar to wild game. No hunting required.
We can leave the wild elk to wander the nature preserves and still feed ourselves in a way that is consistent with our heritage and genetic make-up.
For a few sources of grass fed meats, see:
Linder Bison (available at the Sunday Farmers’ Market at the Marina in Long Beach)
US Wellness Meats
Slanker’s Grass Fed Meats
Posted by Robb Russell, D.C. at 10:51 PM